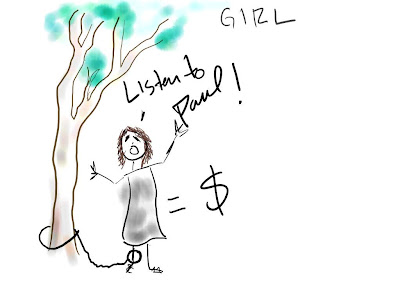 Team-taught with Kathryn today. She read and narrated from Acts 16 and I tried to draw pictures to illustrate. It was great having all the kids in with us for a back-to-school, full-family Sunday. Here’s an excerpt from today’s teaching. More at http://www.emmausteachings.org.

When we have a real relationship with Jesus (when resurrection meets our life) it changes (redefines) everything. It turns everything upside down and backwards.

Prison is no longer a prison…

in that it is the end of the line, the defeat of hope, the place where nothing is free/alive.

Foreclosure is no longer foreclosure…

in that it is the end of the line, the defeat of dreams, a “lost” situation, where no one is free/alive.

When resurrection meets life, every experience holds an opportunity for restoration.

Here’s the question: What difference does Jesus make?

One of the most remarkable realities of this story is that Paul and Silas are experiencing the power of Jesus right where they are.

Resurrection is a here and now reality for them.

We usually expect Jesus to make a difference at another time and in another place.

Which, tragically, is to render the Gospel of Jesus impotent for today. It’s to refuse to embrac

What difference does Jesus make….right where I am? In the midst of this mess?

rtunity for new life. For life over death.

When resurrection meets life…It’s upside down and backwards.

When you’re hurting, that’s when you’re able to bring healing to others.

When you’re in prison, you can sing.

The following are excerpts from a teaching on Acts 16:6-10 about being in a real relationship with God. The full teaching will be at http://www.emmausteachings.org by Monday.

We talk a lot (in evangelical culture) about “having a personal relationship” with Jesus, which speaks to a beautiful reality.

But sometimes, I sense that we’re talking about “having a relationship with Jesus” like it’s something to possess or like it’s a qualifying event (for some future payoff).

We say, “it’s not about being good, it’s about having a relationship.”

We say, “It’s not about religion, it’s about having a relationship.”

And in a very subtle way, I wonder if “having a relationship” almost becomes like “having a ticket” to get in.

What’s important is not that you have a ticket.

What’s important is that you enter into real relationship with the living God.

Jesus warned about a time in the future when he will say to some, “Depart from me. I never knew you.”

It’s so critical that we recognize the remarkable wonder that we have been invited into a real relationship, not just a one time event.

This is why possession language – saying “I have a relationship” is potentially dangerous. It could lead to seeing this relationship as just a ticket to somewhere.

I think that’s why Jesus says one time “you must be born again.” But he says dozens of times, “Follow me.”

Because what Jesus invites us into is a relationship that’s progressive and ongoing… Not like a relationship with the girl at the ticket counter at the movie theater, but more like a marriage…

For nearly a year, many in our community have been preparing for something that is truly counter-cultural: commitment… to a church.

We believe that in order to mature to a place of greater effectiveness, we need to invite one another to simply say, “This is my community. I’m here. I will grow here, embrace others here, and work as part of this team.”

Many are excited about becoming a “Covenant Member” and signing the “Emmaus Covenant.” For some, it’s been a real and difficult challenge.

Here’s a powerful reflection from someone in our community that is well-worth reading (published here with the author’s permission):

I think that is a word that has been attributed to me from time to time. Sadly, this acquired attitude of mine is especially associated with the church. My relationship with the church is complicated to say the least. So now as I begin to embrace the aspect of forming a covenant with my church community, it is not something I have entered into lightly or even without some hesitation.

I have grown up in the church and while I would never say I was a part of an abusive church, I would say it was certainly an unhealthy environment. I became frustrated and alienated from the church early on. I did not realize it back then, but I quickly became someone who just went through the motions. I simply did what was expected of me. The irony of this is that in many ways the church I grew up in reflected the family I grew up in. Much like my church, my family was not abusive, but very unhealthy. I grew up in an atmosphere where I felt disconnected and simply misunderstood. It was like my family unit had started with good intentions, but had somehow lost its focus or meaning. I craved something more, but after a while, I simply stopped trying to be understood. I became numb to my environment. I did what was expected of me on an external level, but internally I began to construct walls in order to protect my heart.

As I got older, I had the chance to redefine my own image of God. It was not an easy process and I was forced to tear down a lot of walls. While this clearer image of Christ and his love had a healing effect, it also made me angry. I was angry at the damage I had suffered in the church. I was frustrated in the years that I felt I had wasted in just religion rather than a relationship with Christ. I am still working through the damage that was done. I know I am not alone in the feeling of being robbed by legalism and its traditions. I have so many friends who swear they will never be trapped in these outdated institutions, some even to the point of not attending church at all. And I get it. I totally understand it. I almost did it.

And yet, it comes back to family. I had the same frustrations, the same hurt directed towards my upbringing, but instead of simply staying single or never having children, I wanted a family, but I also knew I wanted a different definition of family. I was not always sure what it would look like, but I knew what I did not want it to look like. I know I am not a perfect parent, but at the same time I try to be sensitive to the needs of my children through my own pain. It is not always easy, but I think about the love I would be missing if I did not embrace it.

For those same reasons I am going to embrace this new covenant. And while it may sound like it fits the same criteria of church membership, it is as completely different in definition as an unhealthy family versus a healthy family. I know that no church is perfect however; I do have hope for the health that our community offers. I have seen the sickness of the church and I am thankful for a community that is alive and well. I know I am going out on a limb here, but like most things in life that are worthwhile, I know I need to put myself out there and be vulnerable. To be honest, my heart is already with our community; the covenant will only acknowledge that truth.

Every once in a while, I’m surprised by who reads this blog. For instance, I was contacted by someone yesterday from a southern state in which I’ve never lived who “found [me] online” and is interested in talking more about becoming part of the community we lead here in Lincoln. Crazy! And I’m not even on Facebook!

Anyway, after reading the piece I just finished about “one of the most personally disturbing comments I’ve heard in months” my wise wife encouraged me not to post it just in case – for some amazingly crazy reason – the person who made the comment were to read it and – by some chance – take offense to what I wrote.
I care for this person, and I’d never want them to be hurt, especially by my words.
To be clear (because I know this is sounding much juicier than it really is), this comment was personally disturbing because of what it revealed about the Church. And I love the Church. I wrote nothing that criticized the person. Their comment just spun me into a hurricane of reflection that touched-down on some sensitive areas. And I had to write about it.
I still think it’s well-worth reading. 🙂 If you’re still interested, follow the clues and email me [nathan(at)nathanoates(dot)com] and I’ll pass it on…maybe. ha ha!
var gaJsHost = ((“https:” == document.location.protocol) ? “https://ssl.&#8221; : “http://www.&#8221;);
document.write(unescape(“%3Cscript src='” + gaJsHost + “google-analytics.com/ga.js’ type=’text/javascript’%3E%3C/script%3E”));